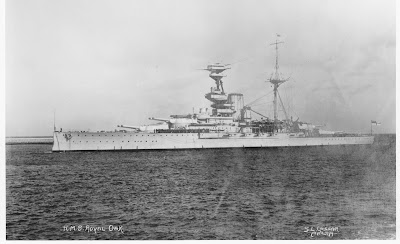 Tomorrow is the 70 year anniversary of the sinking of the Royal Oak (pictured c. 1927) in Scapa Flow, Orkney. The tragic loss of 833 men as well as a sturdy, seemingly indestructible battleship was a terrible shock for Britain so early on in the war.

The Royal Oak was torpedoed at 1.30am by a German submarine. U-47 was captained by Gunther Prien who went on to be awarded the Knight's Cross, Germany's highest honour.

When Winston Churchill, then First Lord of the Admiralty, heard the news he said 'Poor fellows, poor fellows, trapped in those black depths.'