Orkney, like everywhere else I'm sure, has it's share of bad guys and this week, while cataloguing the Halcro Johnston collection (D15), I came across some interesting letters that provide more evidence about one of our baddest guys, General Sir Frederick William Traill Burroughs, described as 'the worst of the 19th century lairds in Orkney'.

The General didn't start out too badly. He was educated in Switzerland before being commissioned into the Sutherland Highlanders, fighting in the Crimean War, the Indian Mutiny and the North West frontier. He was even recommended for the Victoria Cross for his part in the relief of Lucknow but wasn't awarded it. 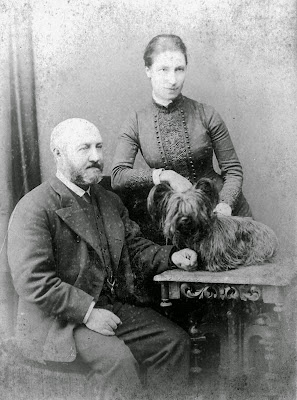 His Orkney infamy began when he inherited the Estate of Rousay and Wyre from his 'uncle' George William Traill. He had a reputation as a strict disciplinarian in the Army and evidently carried that on into civilian life. During Traill's management of the estate his factor began to clear tenants off the land to make room for sheep and General Burroughs carried on this cruel practice after he inherited it. .

Resentment grew among the tenants and came to a head when the Napier Commission came to Orkney in 1883 as part of a public inquiry into the condition of crofters and cottars in the Highlands and Islands. Burroughs appeared before the Commissioners and explained what a benevolent laird he was and how he'd spent loads of money improving the estate. Unfortunately for him the evidence didn't back this up so, in an attempt to silence his critics, he announced that any tenants that spoke against him would be evicted. And that's what he did.

James Leonard was a tenant and gave evidence at the Napier Commission hearing in Kirkwall. For this he and his family were thrown out of their home.

So this brings us back around to the letters in the Halcro Johnston collection. The letters are a record of the activities of the Rousay and Egilsay School Board from March to September 1885. At the start of that time General Burroughs was Chair and James Johnston, factor of the Baikie Estate which included Egilsay, had just been elected as a member. Another member, receiving the highest number of votes, was James Leonard. This was never going to go well! No sooner had the Board got going the General was up to his old tricks of hurling threats around, this time aimed at the other members of the Board. Their "crime" had been to permit James Leonard use of the school building to deliver lectures on temperance, to which Burroughs objected because of "the terms in which Mr. Leonard referred to me before the Crofters Commission and since". He finished by threatening to apply for an interdict to make the board members liable for any expenses. In a letter written the next day by the local Free Church minister it was pointed out that the lectures would not and could not happen anyway because James Leonard, who was employed as a temperance lecturer, had left the island, writing "I cannot understand how they fail to be aware of it".

General Burroughs days as Chair of the School Board were numbered however. By June he had resigned in protest at the dismissal of the Clerk to the Board George Meikle McCrie. McCrie was also Inspector of the Poor and was considered by the crofters to have aided and abetted the General's policy of providing as little relief as possible to the poor.

If anyone would like to learn more about the saga of General Burroughs and the crofters of Rousay I'd recommend The little General and the Rousay crofters by William PL Thomson. You really could make a great Sunday night television drama out of the story. Poldark doesn't compare!

Here, as a balance to this story, is an extract from his Obituary from the Orkney Herald 12th April 1905, page 5, showing General Burroughs local interests one of which was being a founder member of the St Olaf's Episcopal Church in Kirkwall in 1874.