Here are a few items from our fourth instalment of our Orkney At War exhibition. These archive items are taken from records during May, June and July of 1915. We continue with the diaries of James Marwick and Margaret Tait and find out about problems with meat inspection in Kirkwall, the water supply in Stromness, submarine attacks off Caithness, an escaped prisoner of war, enrolment of boys on trawlers, eggs for soldiers and see a few of the men of Orkney serving in and sadly dying in the war.

7 May 1915  Monday 3rd was feeing market day and although the day was very fine very few people were in town. The farmers are late in getting in their crop so that stopped the people from coming to town. On Monday morning a german submarine was supposed to be in Kirkwall Bay and 6 British Destroyers were racing up and down and out and in among the other ships in the Bay at full speed. The weather has taken a turn for the better and now it is quite warm and summer like. Had a walk up past the back of the hospital and saw my old home. The fields were looking fine and all covered with daisies and the sun was shining brightly. These last few days we’ve been very busy preparing our things for the sale today. We will just have 3 weeks in this house now. Everything is turned upside down even now. 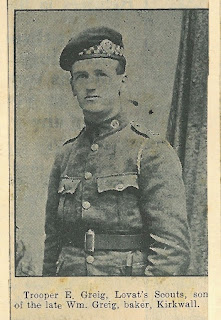 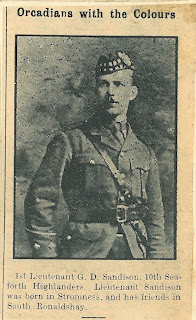 From the Diary of James Marwick, Lieut/Capt. O.R.G.A (T) (Archive Ref. D1/1118) Friday, 7-5-15  Very fine and warm. / Officer of day. Barton & Harris here. Marked store near Mess as a "bench" mark for levelling purposes. Denison & I put a rope around it. / Football match, Territorials v. Marines. The former won 2-0. On watch tonight I got word of the torpedoing of the S.S. "Lustitania" off Irish coast. She was struck by 2 torpedoes & sank in 20". There was a terrible loss of life among passengers. Bore stopped. It is now fully 25 feet down. 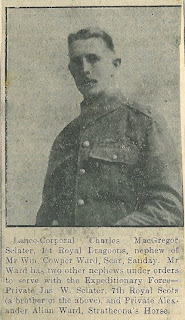 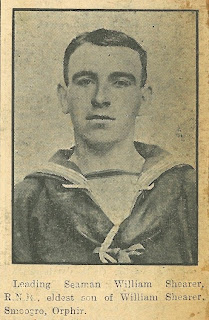 From the Diary of Margaret Tait, sister to James Tait, cabinet maker, Kirkwall.(Archive Ref. D1/525)
8 May 1915  Last evening I went out to buy lard and met Rita Middleton. We both went up to the Temperance Hall to see how the sale was going. There I met Mrs. Middleton, squeezed into a seat beside her and remained there for the rest of the evening. I did not get my lard but enjoyed the sale immensely. When I got home at 9.30 everyone was out, the house in darkness and the fire out. The Lusitania was sunk yesterday, 19 hundred passengers on board, 500 of whom are supposed to have been saved. No particulars to hand yet except that she was torpedoed by a german submarine in the Atlantic. How dreadful to thing of so many innocent lives lost quite needlessly. I hope the Germans will get their just deserts. What a crowd of sailors and provision men are ashore today. 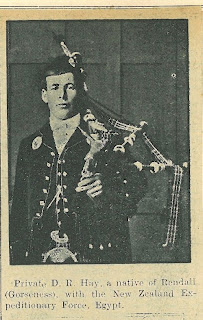 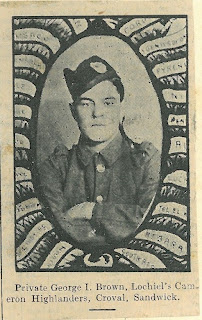 
Saturday, 8-5-15  Fine - bought ½ cwt Sugar at 2½lb & and sent it home, also some dirty clothes, by Harvey the well borer who left today. He finished the bore head and built a few stones around it finishing it off with a big flat stone ready for the pump. / I got a decanter & glass from Nobby Clark. / Man lost off a trawler near Switha island. He was picked up but died later.

Orcadians killed in the war, kept in a scrapbook by Dr. Duncan, Stromness. (Archive Ref. D1/1127) 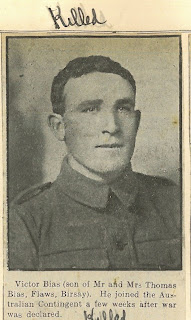 From the Diary of James Marwick, Lieut/Capt. O.R.G.A. (T)  (Archive Ref. D1/1118) Friday, 14-5-15 Snow showers. / Things are very dull and lifeless her which combined with a want of friendliness among officers make life very dreary. I wish I could get a shift from here. It is over 4 months since I came here. / Goliath sunk in Dardanelles.

Stromness Town Council, 19th May 1915   (Archive Ref. S1/5, page 152)
Water Supply. An application from the Admiralty to connect with the watermain at the Mineral Well for a pipe running to the vicinity of the Braehead.