This year marks the 900th Anniversary of the death of Earl Magnus of Orkney. The Orkney Archive and Orkney Room have many sources of information in connection with Earl Magnus, some of which I will share with you below: 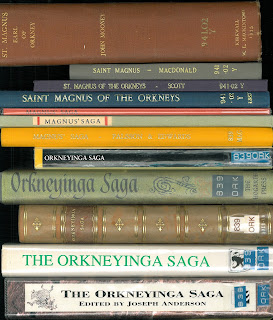 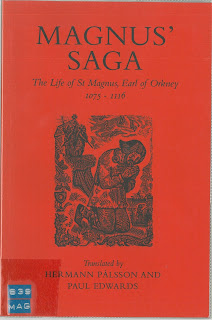 In Magnus Saga the Life of St Magnus, Earl of Orkney 1075-1116 Palsson and Edwards sums up the story on the back page,
"The Norwegian's held sway in the most northerly areas of present-day Scotland for 600 years, from the 9th century to 1469. And in this earldom of Orkney, Magnus Erlendsson (St Magnus of Orkney), was in every way a central figure.
...His father fought on the Norwegian side at the battle of Stamford Bridge in 1066. He himself ruled as Earl of Orkney with his cousin Haakon, following an early life of piracy and Viking expeditions and a time living at the court of King Malcolm III of Scotland.
But this biography written in Icelandic in about 1250, is particularly concerned with the execution of Magnus which took place on the island on Egilsay in 1116 or 1117 and which led to his veneration in every part of the Scandinavian world, and to the building of the great cathedral in Kirkwall.
...St Magnus Day is still celebrated on the 16th April." 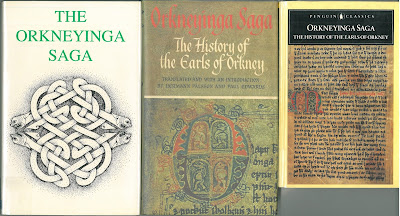 He is described as "a man of extraordinary distinction, tall, with a fine, intelligent look about him. He was a man of strict virtue, successful in war, wise, eloquent, generous and magnanimous, open-handed with money and sound with advice, and altogether the most popular of men." (p83 of Orkneyinga Saga The History of the Earls of Orkney Translated by Palsson and Edwards)

He offered himself as a martyr to Earl Hakon, when their joint rule fell apart, "'There's still one offer left for me to make', said Magnus, 'God knows that I'm more concerned with the welfare of your soul than with saving my life. For your own sake, have me mutilated in any way you choose, rather than take my life or else blind me and lock me in a dungeon'
I'll accept these terms', said Hakon, 'and make no further conditions'"
To the man told to kill him, Magnus said, "This is nothing to weep over, a deed like this can only bring fame to the man who carries it out. Show yourself a man of spirit and you can have my clothes according to the old laws and customs. ... Stand in front of me and strike me hard on the head, it's not fitting for a chieftain to be beheaded like a thief."
(p87-8 of Orkneyinga Saga The History of the Earls of Orkney Translated by Palsson and Edwards)

Magnus was killed and his bones left on Egilsay.

Traditions grew up around the place where he was slain. Ernest Marwick has collected a few which can be see in D31/37/1 Folder entitled St Magnus - Traditions and Pictures containing press cuttings, notes, pamphlets, photographs and correspondence here in the Orkney Archive:

"There was a legend that when Magnus was slain on Egilsay his blood stained the daisies red, and that in the place a lovely thornless rose grew which flowered each Christmas morning. If a leaf was plucked while the dew was still on it, it would cure black death and leprosy"

"That one will always find an open flower growing there."

Ernest Marwick collected traditions in St Magnus Folder reference D31/37/1 regarding resting-places of the body of St Magnus on the way from Evie to Birsay. From an interview with Mrs Matches of Brochlea, Birsay in 1972 he gained this story:

"There was a Mans Stone at Crowdue between eighty and a hundred years ago. Robert Harvey of Crowdue decided to break it up because it was near the old road, and something of an impediment to the traffic on the road. He was warned by auld Ibbie o Moosakelda to desist for it was a sacred stone. A splinter of it entered his hand between the thumb and forefinger and he died a week later of lockjaw."

In the John Mooney papers, reference D49/1/11, there is a bundle of correspondence and press cuttings received by him following the publication of "St Magnus, Earl of Orkney" in 1936. It includes a letter from J. Graham Callander, National Museums of Antiquities, Edinburgh regarding discoveries at Garth, Nether Brough; and mention of a symbol stone found at the Brough of Birsay, 22 May 1936.


"Magnus Saga" says: "The body of Earl Magnus was carried to Birsay and given burial at Christ Church, which Earl Thorfinn had built."

Then "Magnus' Saga" mentions the sanctification of St Magnus on St Lucy's Day, December 13th, over 20 years after his death by Bishop William and later still: 'After Earl Rognvald Kali, nephew of the Holy Earl Magnus, had come to power in Orkney and settled down, he had the ground-plan drawn up for St. Magnus' Cathedral in Kirkwall and hired builders for the work. The structure progressed rapidly and well; it is a remarkable building, on which great pains were bestowed, and later the holy relics of Earl Magnus were transferred to it. Many miracles continued to take place there. Nowadays it is the episcopal seat, the same that used to be at Christ Church in Birsay."

More traditions collected by Ernest Marwick in the St Magnus Folder D31/37/1:
"Sigurd Tandrisson was the name of a farmer who lived at Dale in Shetland. He became so mad and violent that he had to be sewn up in a cow-hide. He was brought like that to the shrine of St Magnus, and there he got back his wits and full health, and went away quite whole."


and from Mrs Matches again:
Birsay to Kirkwall
"The procession went by the Strathyre stane. They crossed through Greeny, and there was a resting-place between the Mill of Housby and the Loch of Sabiston."

"This broken earth-fast stone marks, according to local tradition, the first resting place of the procession, when the relics of St Magnus were brought from Birsay to Kirkwall. It is in a field below the house called Strathyre in Birsay."
[Caption to photograph above, written by Ernest Marwick, D31/37/1]

Blessing the Stones
"My old teacher, Miss Stanger of Wrangleha, who was a very careful body about her facts, often said that there was an old Birsay tradition that the stones that were set up to show the places where the body of St Magnus rested had oil poured over them and they were blessed. After that everybody looked on them as sacred and nobody would touch them."

From William Sabiston, Swartabreck, Birsay in 1968, "MANSEWAL (MANSE = MAGNUS; WAL = WELL) along public road not far from Mill Cottage on road to Wattle. Said to be a traditional resting place for the bearers of the remains St Magnus on the road to Kirkwall."

Sources used in this blog:
Orkneyinga Saga The History of the Earls of Orkney Translated from the Icelandic and introduced by Hermann Palsson and Paul Edwards, pub 1978. Orkney Room reference 839 ORK 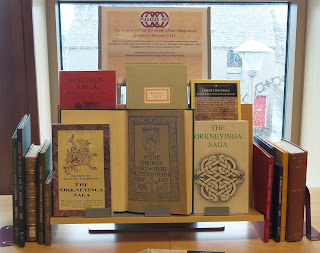 If you are visiting the Orkney Archive and the Orkney Room and would like to see some books or archives  just ask a member of staff in the Archive Searchroom who will help you find them.
Posted by Dusty at 11:00