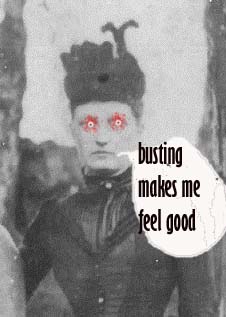 The re-boot of Ghostbusters opens today after months of outrage at the very idea that ladies with lady-parts are playing the four lead roles. What next? Ladies presenting prime-time shows like Strictly and Bake Off? Lady prime ministers?? Ladies on the actual street just walking around and stuff and saying things and not staying in the kitchen???


There is the story of the young lad in Copinsay who, when his parents were away took the opportunity to exhume a grave (AS YOU DO),known locally as the Reekiknowe, upon which a ghostly spectre begged him over three consecutive nights to 'bury me bones, bury me bones' with increasing intensity until the lad did so. (D31/3/4)


A miller and his family from Swanney all saw a huge, black dog bound across their floor and disappear under the bed. The next day the miller was found drowned at the shore and his cat drowned in the mill stream.  (D31/3/4)


Ernest Marwick was also told about the Swanney loch ghost which looked like 'a sheep standing on it's hind legs' and was seen running across the road and then disappearing. It was also described as a floating ball of white steam.( D31/1/5/14)


My favourite is the crying baby of Deerness who had been terrorising people by following them through the darkness for years. The child had apparently been illegitimate and had died unnamed. This was finally put a stop to when a local man shouted 'Hadd away wi' thee bare arse.' The child apparently disappeared, content to finally have a name. The name bare-arse. (D31/1/5/15)

Email ThisBlogThis!Share to TwitterShare to FacebookShare to Pinterest
Labels: #Ghostbusters, Ernest Walker Marwick, folklore, ghosts, terrifying Edwardian ladies who we have no control over.