Today's post continues with the German ships interned in Scapa Flow from the end of 1918. The Orkney Archive holds a typewritten memoir written by John J L Tulloch who was born in 1909. The account was written when Mr Tulloch was an older man and describes what life was like living on a farm on a small island in Scapa Flow during World War 1, the British Fleet, the Hampshire, the Churchill barriers, the Royal Oak.


He describes the arrival of the defeated Germans:


So on a dull November day the German High Sea Fleet with Rear Admiral Ludwig von Reuter in command steamed into Scapa Flow through Hoxa Sound with the dull winter sunshine glinting on their grey hulls. Line ahead they came escorted by British warships, those mighty leviathans of battle that had only ventured out once in full force at the Battle of Jutland from their snug havens in Germany.


The German ships ceased to become a novelty to the young lad:


My home stood near the shore on the West side therefore the battleships...became an everyday scene to me as the months went past, in fact some of them were so near to my home that on a calm day we could hear the sailors talking or singing quite clearly. On a Sunday a brass band on the S.M.S. Frederick derr Grosse used to play their German military tunes when the weather was good, so those great ships became a part of my childhood days... 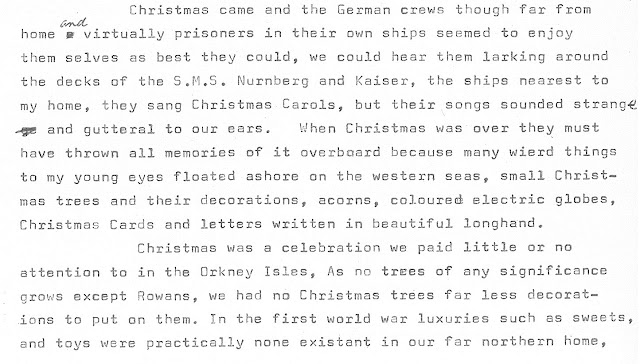