Archive in a Pandemic A-Z: G is for

Green gloves in particular for us. Here is Archiver modelling them: 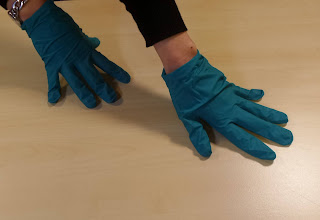 Gloves have become an important part of our day. We once only donned white cotton gloves to handle very old archives and the Fonds sometimes wore just one glove (not unlike Michael Jackson) when cataloguing photographs. But now we have changed to using these delightful disposable premium nitrile powder-free green gloves.

Now we wear gloves when handling archives, when cleaning tables, chairs and equipment after use and when cleaning touch points around the building. Even the Library staff wear them!

We also set a pair out on the Searchroom tables for the public to use when handling archives. If they really don't want to wear gloves, we ask that they wash their hands before handling the archives. In the long run, the green gloves are better for our archives, as turning pages of documents was often difficult with the cotton ones.

I looked for gloves in our Archive collections and found one mention in the Balfour papers where a set of cotton gloves were sent to Master Edward Balfour around 1836, when he was aged 5.

We also have a letter written by Edward Balfour (aged 10) from Cliffdale in Shapinsay on 20th May 1841, not about gloves, but about apples. We just like it and want to share it with you.

Edward Balfour was born on 13th December 1831 in Shapinsay. His parents were Captain William Balfour and Mary Margaret (Baikie) Balfour. His father inherited the Balfour and Trenaby estate in 1842. His brother David inherited the estate in 1846 and engaged architect David Bryce to design and build Balfour Castle between 1847 and 1850.

That was the only mention of gloves in the archive catalogue.
BUT There are two people called Glover mentioned:
D1/1048/1: The Bismark Story - May 1941. A compilation by Gerry Glover (P.O./L.T.O.)
D85/1/12: Traill of Woodwick papers: Correspondence between Thomson Glover and John H Traill, 1887.
Posted by Dusty at 09:00