Our Library and Archive Manager, Gary, travelled to Wales yesterday to the CILIP Cymru Conference for libraries, archive and museums. His mission was to explain how brilliant Orkney Library and Archive are. The theme for this year's conference was Hard Times and the focus was on the survival of these extremely important institutions in these financially delicate times.

Gary talked about our strong relationships with groups such as the Orkney Family History Society and the Talking Newspaper. He showed photos of our wonderful volunteers who work in both the library and archive departments. There were also examples of  our website, the blog and Stewart's hilarious tweets (which were mentioned on Simon Mayo's drive time show!) 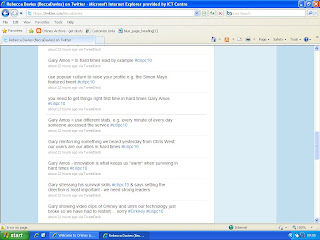 Through the magic of twitter, we were able to follow the talk in real time. " In hard times, lead by example!", Gary called, " be creative - innovate - but be prepared for things not going as successfully as you'd like!" It was at this point that Gary fell to his knees, his arms raised to the heavens. His assistants hurried over with his cloak and began to lead him off the stage. He was almost at the wings when he flung it off, ran back to the apron of the stage and grabbed the microphone again "Our users are our allies, our users are our allies!!!" he shouted.
The audience went wild as he gave the librarian's salute ( make an L with your right hand and hold it against your forehead.) and blew kisses to the crowd. He then led everyone in a rousing rendition of  James Brown's  'I Feel Good  - I Got You' (So good, so good, 'cos I got books...)   and everyone got hyperglycemic on Orkney fudge.
I'm sure that Gary will be thrilled to learn that we were staring at a twitter page when we were supposed to be doing work. His presentation was very well received and his breakdancing encore has already become the stuff of legend.
Posted by Archiver at 11:22

Email ThisBlogThis!Share to TwitterShare to FacebookShare to Pinterest
Labels: libraries are ace, tweeting