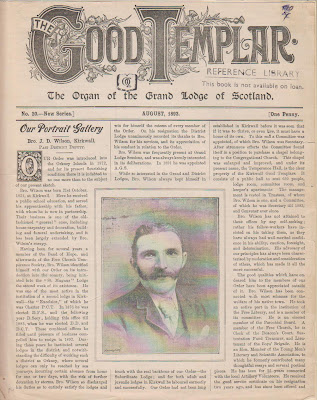 It is tempting to think that binge drinking and concerns about its effects on society are a modern phenomenon.
However, the second half of the nineteenth century and early years of the twentieth century saw great efforts in Orkney, and indeed the rest of Britain, to stamp out the 'demon drink'.
Good Templar associations conceived along Masonic lines complete with rituals, costumes and passwords sprung up all over the county and Temperance hotels were situated throughout Kirkwall and Stromness. The Albert Hotel was a temperance venue and nearly every Parish had at least one Good Templar Lodge including the Emblem of Love Lodge in Holm, the Star of the East Lodge in Deerness; the Maeshowe Lodge in Stenness and the Noltland Lodge of Westray.
The stated object of the Temperance league was "the entire abolition of the drinking system" and much of the dedicated literature quotes alcohol related death and crime statistics in much the same manner as newspapers and websites do today. Indeed, Royal Commission reports were ordered on the situation and articles bemoaning the damage being done to the nations health, mental acuity and economy by 'the greatest evil' appeared in the local and national press with great frequency.
In 1920, the first Local Veto Polls took place. The results ensured that Stromness and Holm became 'dry' parishes, with no alcohol license at all, and Kirkwall's license was 'Limited.' Reactions to this were mixed. The Orkney Herald carried a regretful obituary for 'Mr Johnnie Walker' claiming that 'his demise has left a vacant place in the hearts (and the throats) of a host of his admirers and friends, both open and secret...' Some felt that other parishes deserved to go dry as a 55% share of the vote was required to carry a no license decision, meaning that some areas where the majority had voted to be dry remained licensed.
It must be noted that there was a great reduction of crime reported by the police post Veto Polls and various statistics to this effect were brandished by the No License campaigners whenever a reversal was threatened.
Stromness was officially dry until 1947 whereas Holm did not reverse their decision until 1975.
Information taken from: Orkney Herald, 5/01/1921, 1/06/1921, 29/11/1922, 14/11/1923.
The History of Stromness by George S. Robertson
Various Good Templar pamphlets and journals.
Posted by Archiver at 15:57