A Refutation of Charles Darwin 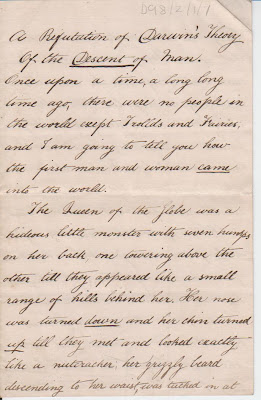 Today is the 150th anniversary of the publication of Darwin's 'Origin of Species'. We do not have much about Darwin in the Orkney Archive but we do have this four page essay 'A Refutation of Darwin's Theory of the Descent of Man'(see left.)
'Once upon a time, a long long time ago, there were no people in the world except Trolls and Fairies; and I am going to tell you how the first man and woman came into the world.
The Queen of the Globe was a hideous little monster with seven humps on her back, one towering above the other till they appeared like a small range of hills behind her. her nose was turned down and her chin turned up till they met and looked exactly like a nutcracker; her grizzly beard descending to her waist, was tucked in at her girdle. This creature had decreed, that if a Fairy woman and a Fairy man could be found, one with a nose a yard long, the other with a chin the same length; and if they should marry, they would immediately become a real live Man and Woman, take possession of the world and turn all the rest of the Fairies into stars.
Well, of course there was a great deal of measuring of noses and chins going on among them (for they all had an ambition to become men and women) but the nose and chin could never be found that was the right length, no matter how they pulled and twisted them about. Till one day, they were all enraged and disappointed when a wee Fairy man hopped out of a freshly opened bean pod, with a nose just the right length.
This Pygmy announced his intention of becoming a man and accordingly set out to look for a wife with a chin the requisite measure. He had travelled over all the world till he came to Orkney, but had not found his twin-soul.
When he came to Kirkwall, however, he went to the Ayre, and found a party of Fairies dancing the 'Highland Fling', and in their midst , playing upon a flute, sat a girl with a chin a yard long!!
So the Fairy man with the outrageous proboscis, and the fairy woman with the unrivalled chin, were united in the Holy Estate of Matrimony; and the stars you see every night are the rest of the Fairies, and the moon is their Queen._________
Luniscar'
This academic thesis was taken from the Minervian Library Collection, reference D98, which consists of nine folders full of stories, poems, plays and novellas by the Cowan and Bremner children. Other titles include " Evangeline", "To Win His Love", " A Past For Margarita" and "The Birth Right, or The Secret."
Maria, Clara and Alfred Cowan and their cousin Isabella Bremner were Kirkwall residents aged 6 to 14 when the library first originated in 1865 and who who later ended up living in Tankerness House, now the Orkney Museum. The Minervian library consisted at one point of roughly 100 volumes and was a functioning lending library amongst the children's friends and acquaintances.
Posted by Archiver at 14:53