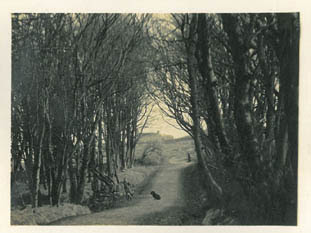 In 2003, Orkney tree planting expert Jenny Taylor was asked about the then make-up of woodlands in Orkney. She gave the overall area of 105 hectares which was accounted for by 10 hectares of native woodland, 18 acres planted by the forestry commission in in the 1950s, 5 hectares planted on Flotta, 25 recently planted hectares and 47 hectares of woodlands planted pre-1920s around big estate houses such as Binscarth, Crantit, Papdale and others.

Binscarth woods is perhaps the most noticeable of these Victorian-era plantations. It is thought that the trees, which are visible from the Kirkwall to Stromness road in the parish of Firth, were planted soon after the building of Binscarth house in 1850 by the farm's factor, Robert Scarth. The woodland was used for entertaining and leisure. Servants who worked at the house have told researchers about having to carry every single piece of a silver tea set into the woods so that the gentlefolk could have tea under the trees.

This section of 1882 Ordnance Survey map shows the spread of the woods by that date: 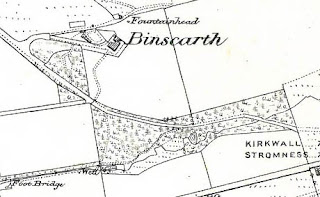 The picture at the head of this post was taken in the 1920s and was found in an album of photographs which were found in a skip! (A skip!) Thankfully, a passer-by fished it out and brought it to the photographic department to be lovingly copied and catalogued.


In 1952, the Orcadian dated 17th January tells us that hundreds of Binscarth trees were uprooted by the fierce storm of that year and the final number has been suggested to be 2,000. The next week's edition showed some of the damage: 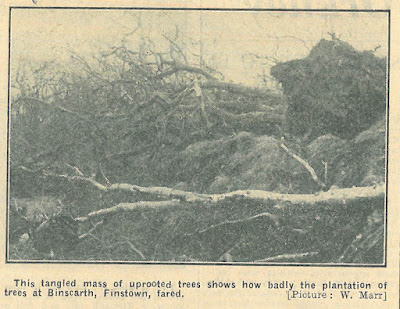 The woods have been added to since by great, great grandson of Robert Scarth, Major Malcolm Macrae, who planted 2,500 trees in 1990 and a further 'shelter belt' in 1995. Tree varieties include sycamore, Swedish whitebeam, Sitka spruce, mountain ash (rowan) and larch.

The woodlands are no longer just for the use of the owners and are frequented by walkers, naturalists and school groups who greatly enjoy exploring the now well-established trees.

'Immediately a new world of green gloom received us, different to anything else in the islands. We were moving now through an intimate sylvan world, and the sense of space and light felt elsewhere in Orkney, was lost. But this new green world was not hostile. Rather the contrary. The brutality of nature, the vast forces of energy and ruthlessness which can be felt even on a peaceful afternoon at the top of a sea crag, were in this woodland muted and softened to a delicate gentle beauty. It was a world of silence and soft whisperings. The same kind of sacred gloom pervades the interior of St Magnus Cathedral'