﻿ Another 'big house' garden today. Papdale house stands in central Kirkwall behind its namesake school. The children of the school have the use of a walled garden, known as 'the Secret Garden' which was attached to the old house. Home to many mature trees and allotments, you can read more about the garden, which has recently been renovated by Orkney Blide Trust here: https://theorkneynews.scot/2018/06/29/orkneys-secret-creative-garden/


Papdale house was built in 1807 by Malcolm Laing, (Advocate, historian and M.P. for Orkney from 1807-1812) and, in August 1814, he entertained an old friend from his legal days, Sir Walter Scott. As noted, in the article above, there is a rumour mentioned that Sir Walter was responsible for the avenues of Laburnam trees within the garden. He was only in Kirkwall for a couple of days, so it seems unlikely that he actually planted them himself. He did, however, note the scarcity of trees, so perhaps strong hints were made...

'All vegetables grow here freely in the gardens and there are one or two attempts at trees where they are sheltered by walls. How ill they succeed may be conjectured by our bringing with us a quantity of brushwood, commissioned by Malcolm Laing from Aberbrothock, to be sticks to his pease.'

Malcolm Laing's childhood home was a town house in Kirkwall and was, according to his brother Samuel Laing's biographer Ray Fereday, 'remarkable in Samuel's youth for having three trees growing in its front yard. The house survives, with a ground-floor extension for two shops, and one decrepit sycamore remains, long known as the big tree.'


Earlier, in the same book, Samuel himself remembers the three trees as being plane trees:

'We lived in that house in Kirkwall a little below the broad street which is distinguished by two or three middling sized Plane Trees, which were planted by my father and are almost the only trees in the country.'

Perhaps the sycamore was planted after the Laings' residence.

The author of the preface to Samuel's autobiography, William P. L. Thomson was not just a historian, he also served as the rector of Kirkwall Grammar School from 1971-1990, living in Papdale House and, with his wife, tending the garden and its trees.

An aerial view of the Kirkwall Grammar School can be seen below, with the garden just behind it: 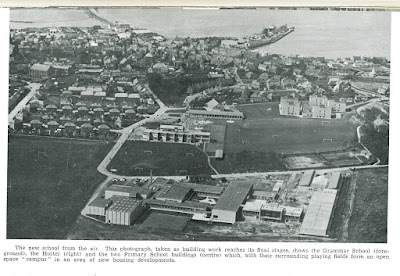 This photo was taken in the mid 70s and the walled area does seem quite sparsely treed compared to the garden today. The woodlands either side, however, seem in fine fettle and have been added to recently by pupils of the Grammar school.

The Autobiography of Samuel Laing of Kirkwall, edited & supplemented by R. P. Fereday with a preface by W.P.L. Thomson

Who Was Who in Orkney by W. S. Hewison

Orkney's Secret Creative Garden in The Orkney News by Fiona Grahame
﻿
﻿
﻿
Posted by Archiver at 09:00