Oh we love advent readers!
We love it!
We LOVE it!


This year, we bring you 20 Days of Orkney Trees. Every day until Christmas (except Sundays), we shall prove that, contrary to popular belief, Orkney DOES have trees. Like, at least 5 or so?


The Orkney Isles (with the exception of hilly Hoy), are relatively flat with both wind and rabbits proving a challenge to hopeful tree-planters but, as you shall see, there are many wonderful sylvan corners; some ancient, some Victorian and a great many newer additions.


We just have to start with one tree. THE tree of Kirkwall, known by all as 'The Big Tree'.


The photo above was taken by Tom Kent and shows that the large Sycamore stands right in the middle of the shopping street. It had originally been part of a walled garden as can be seen below... 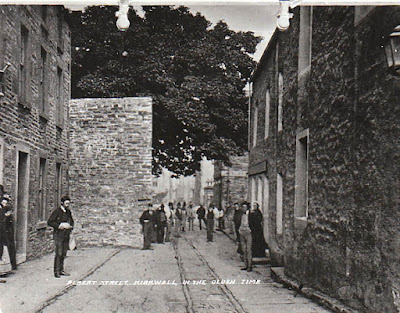 ...and when the wall was removed, the tree stayed.


Over the years, there has been much discussion of this hardy plant and it has been threatened with destruction many times. Indeed, its obituary has already been written by Ernest Walker Marwick:
﻿

In 1875, T. H. Slater demanded that the council prune the branches on his premises' side 'to avoid litigation and by way of compromise'. The council agreed: 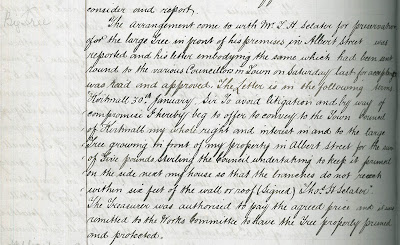 As recently as 1987, there was a council meeting held to discuss its removal but a decision was reached to pollard it instead. The Big Tree still stands in Albert Street, Kirkwall, having outlived the author of its obituary by over 40 years. There is a large metal pole through its trunk, but it still stands tall and surely contributed to the High Street winning the 'most beautiful in Scotland' accolade last month: https://www.bbc.co.uk/news/uk-scotland-north-east-orkney-shetland-50521432